It's a Jungle Out There

Hello my friends!  It's been a cold one out there - we in the mid-west have finally gotten some snow although I still think we're below the average from the last few years.  Nothing earth shattering of course but we did have accumulations of about 2-3 inches.  Woo-Hoo!! The temperatures have been dipping into some pretty nippy lows...I woke up one morning and on the radio I heard it was 3 degrees with a wind chill of -17.   Yow-za!!!!!  I haven't seen temps like that since....well, last year!   LOL!  It's really been screwy this year - last week we had highs of mid 60's (yeah 60's...not a typo) and then we dip down to a high of 10! Come on Mother Nature stop messing with our heads!!!

Just a quick update on The Mom.....I've always suspected she has poor circulation in both her legs so I took her for a CT scan which confirmed a blockage - then I took her to a specialist and he said, yep, there's a blockage so I took her on Monday to St Lukes in Milwaukee and she had an angiogram and yep, onced again it was confirmed she has blockage in both thighs.  Unfortunately, the doctor was unable to clean out or insert a balloon/stint to help.....so she has to have bypass surgery on both legs.  Whoa Nellie - I guess I'll be scheduling that soon!

On to more happier news!  The Spring issue of CardMaker Magazine is out and your's truly has a card included.  This one is a baby shower invitation made with animal stickers from Penny Black.  It was so easy to do....I took the stickers of the sheet and placed them on a white piece of cardstock.  I then cut out each animal and placed them on the base of my invite.  I used a leaf stamp from Bo Bunny to decorate the inside section where the details for the shower will be.  I must admit I borrowed the idea to cut out the stickers from my former manager at Archiver's (thanks Megan). 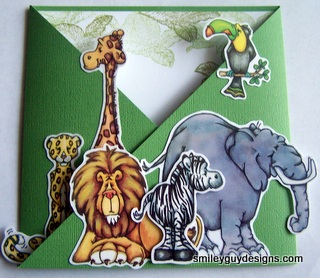 The card base is created like a pocket card but not adhered at the bottom.  Here's the inside of the card.  The gorilla looks confused, probably because he doesn't know where the par-tay is being held!!! 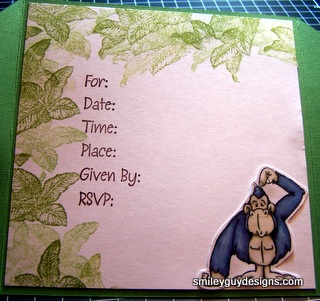 Hope you enjoyed this card.  Thanks for stopping by and hope to see you soon.

Thanks,
Heidi
Posted by Heidi at 9:09 PM